Prince George and Princess Charlotte attended the Queen‘s funeral at Westminster Abbey on Monday alongside their parents, the Prince and Princess of Wales.

MORE: The Princess of Wales holds Charlotte’s hand at the Queen’s funeral – all the photos

The seven-year-old princess looked smart in a black outfit while her older brother opted for a smart navy suit.

While some royal fans might be wondering why George was wearing a dark blue outfit instead of the traditional black, funeral etiquette states that wearing dark colours to a funeral, including navy, is considered a sign of respect for the deceased.

After arriving at the Abbey, the two young royals walked in the procession behind the late monarch’s coffin. In a last-minute change, the siblings walked side-by-side in between their parents. The pair were scheduled to follow behind Prince William and Princess Kate, ahead of their uncle and aunt, the Duke and Duchess of Sussex.

MORE: All the photos of Prince George and Princess Charlotte at Queen’s funeral

Their younger brother, Prince Louis, was not present at the service, however, and is likely to be considered too young to attend the ceremony. 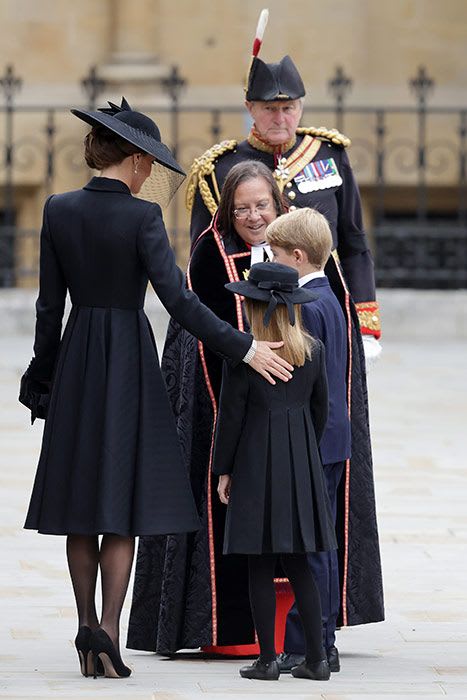 Prince George and Princess Charlotte arrived alongside their parents

The service will be conducted by David Hoyle, the Dean of Westminster, with Prime Minister Liz Truss and Patricia Scotland, the secretary-general of the Commonwealth, reading Lessons.

Prayers will be read by the current Archbishop of York, the Cardinal Archbishop of Westminster, the Moderator of the General Assembly of the Church of Scotland and the Free Churches Moderator.

Several hymns will also be sung, including The Lord’s My Shepherd, I’ll Not Want, which was also included at the Queen’s wedding, when she married the Duke of Edinburgh in the same abbey, as a 21-year-old bride in 1947.

Prince George wore a smart navy suit for the funeral

At the end of the service, following The Last Post, two minutes’ silence, the Reveille, and the national anthem, the Queen’s Piper, Paul Burns, will play the traditional lament Sleep, Dearie, Sleep.

The coffin will then travel in procession from Westminster Abbey to Wellington Arch before moving to Windsor.