Kang Daniel isn't into astrology —  at least, not like he once was. Nowadays, the K-pop star believes in his staff, a night of gaming with friends, and "when the skies are clear, I like to end the day just by looking up at the stars," he shares with Allure via Zoom.

Even after the industry (and its constant scrutiny) took a toll on his mental and physical health, causing him to take a three-month break to get treatment for depression and panic disorder, Kang never stopped believing in it — he took that onus on himself. Slowly but surely, Kang is learning to have trust in himself again, too.

Although he admits he only looks up his horoscope when "it's good," Kang's astrological sign speaks volumes about the way he's been able to handle the hardships of the past three years. Through contract disputes, starting his own companies, dealing with hate comments, and getting his mental health on the right track, Kang has been a true Sagittarius: resilient, adventurous, and effortlessly magnetic. (The performer, born December 10 in Busan, South Korea, has both his sun and moon in the fire sign, by the way.) We're about to see — and hear — that more than ever with the release of his latest EP, Yellow. 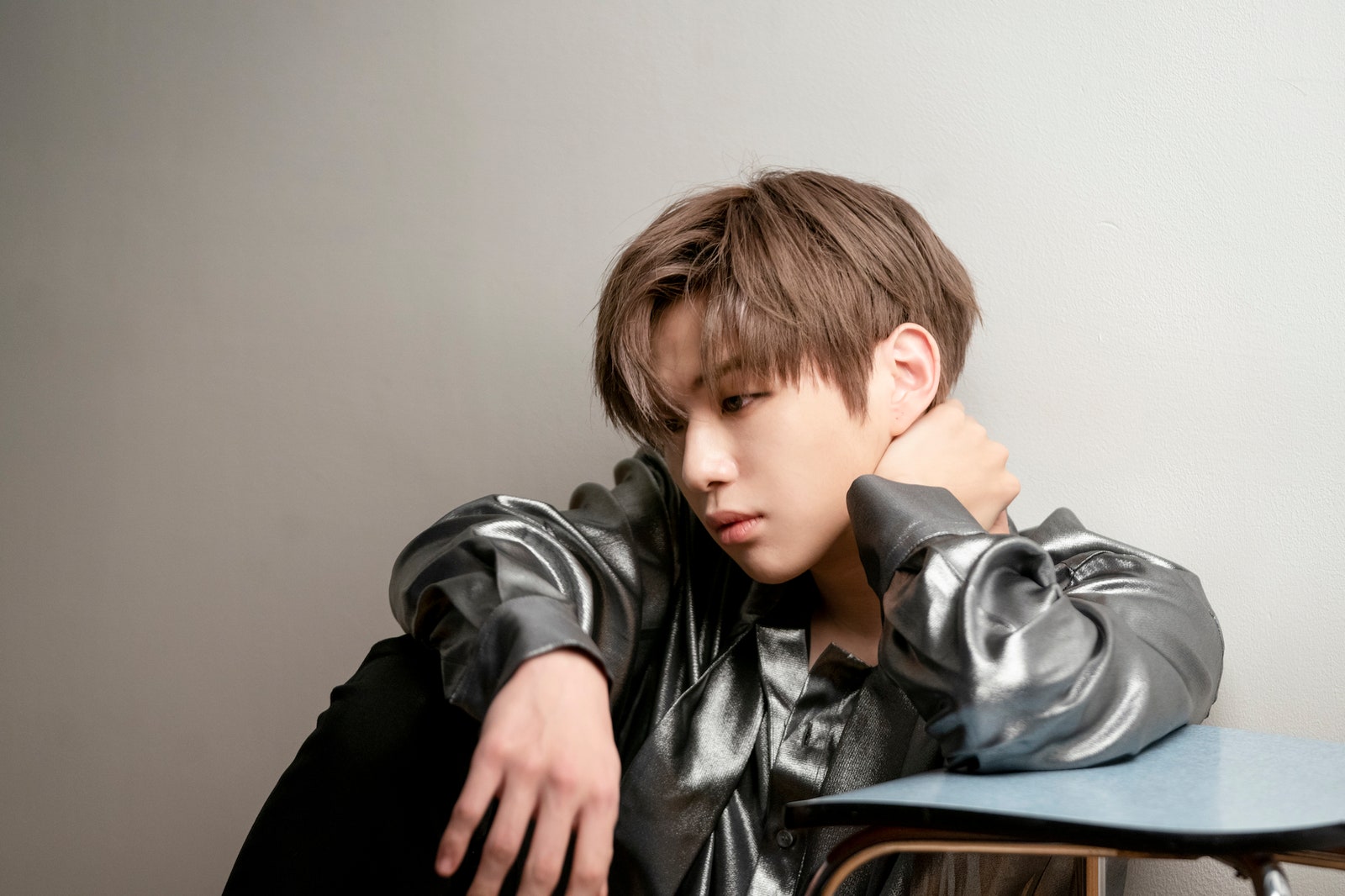 In its title track, "Antidote," Kang croons about wanting to wipe his slate clean and begs to be rescued from the darkness in his mind. It's a chilling peek into a depressive episode, which is rarely (if ever) seen in K-pop. For years, discussing mental health was seen as exposing your weakness and shattered their façade of perfection. Sagitarriuses, like Kang, hate feeling restricted by anything, though, including such stigmas. "They really want to be who they want to be and do whatever they want," energy reader HeyJune Jeon tells Allure. "They love to play. They don't like rules."

Interestingly enough, Kang admits his current antidote is… gaming. "It's not that I don't like to make music," he prefaces, "but that's more work-related. I really enjoy having personal time to myself at home." Delving into the alternate universes of the likes of League of Legends isn't a form of escapism, though, as I first assume. Instead, playing games engages a sense of accomplishment and teamwork beyond his profession. "When I play games, there's an objective," he explains. "You feel joy when you are able to succeed [in it while] working together with your friends."

During times when intrusive thoughts and uncomfortable, difficult emotions dominate Kang's mind, though, music does come into play. In fact, putting some on has been a source of comfort for him long before he started singing songs himself. "Most of the time, I listen to music to help get myself back," Kang shares. "I listen to more music with negative messages than positive messages, and it helps me clear my thoughts." Through the lyrics, he's able to realize he's not alone. He's not the only one feeling this way. He can keep going. 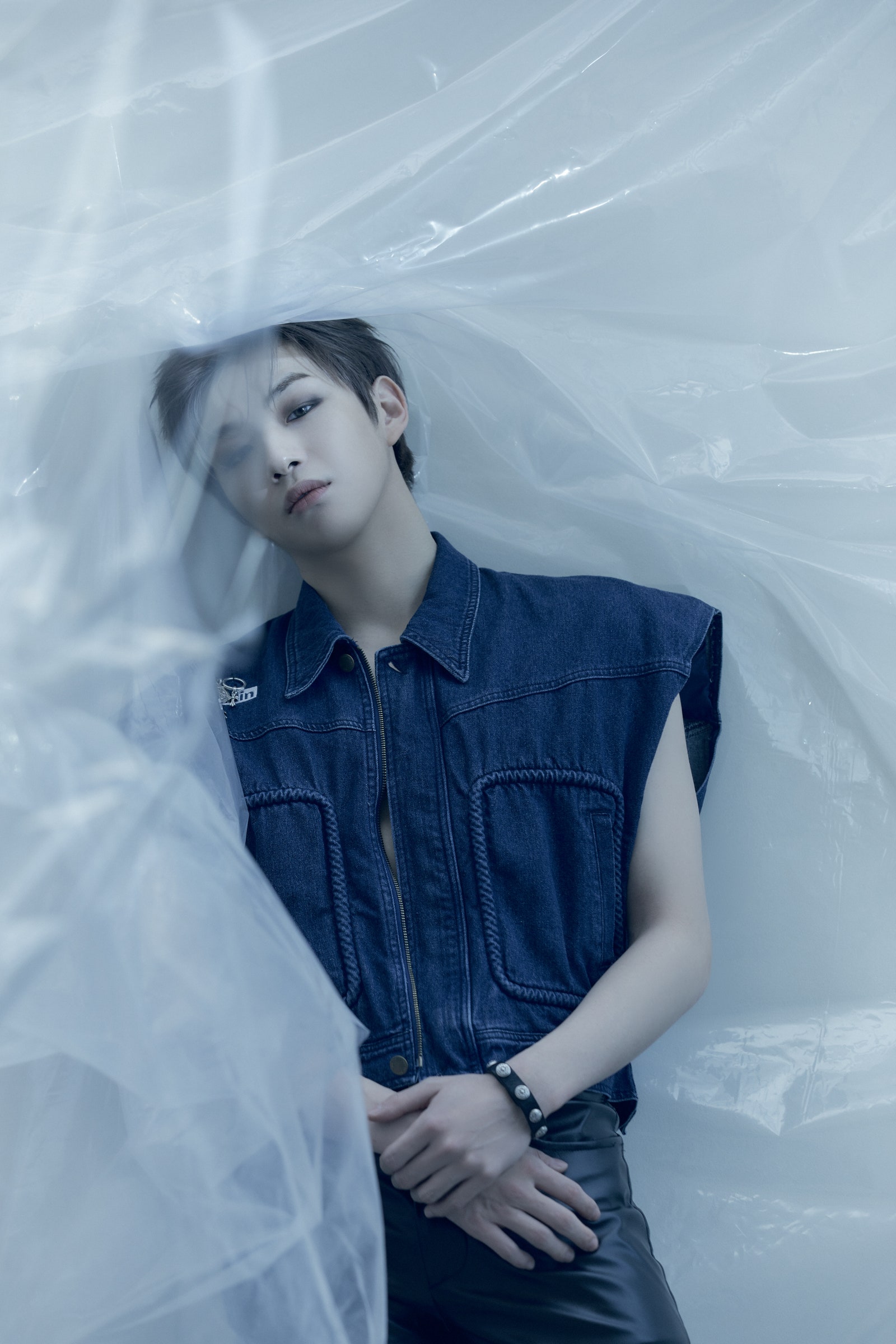 This same sentiment rings through Yellow's last track, "Save U," a message to Kang's younger self. He sings about saving himself when the world feels like it's falling apart and lets himself know that he doesn't have to fake a smile — it's okay to share your pain. It's heartbreakingly beautiful. During our interview, Kang is less gentle with what he would tell himself a year or two ago. He keeps it as simple as this: "It's unfortunate but have a hard time. Just go through it," he remarks. This bluntness is typical of a Sag, Jeon notes. "They don't like things to be so serious," she explains. "They're also very honest and direct."

Later during our time together, Kang is a bit more vulnerable about his healing process. "It's important that you open up yourself," he states. "If you close up your heart, it's just so hard to overcome it by yourself."

These same reasons are why Kang wasn't afraid to share somber parts of himself with the world. Sure, he was worried. He repeatedly tells me this, but the success of "Paranoia," Yellow's pre-release single, gave him the confidence to bring the EP to the world. The song is much angstier and heavier than his previous releases, so Kang was fully prepared to deal with negative reactions. If you quickly scroll through the comments on "Paranoia"'s music video, you'll see fans describe the song as a "masterpiece" and "an accurate portrayal of paranoia," though. 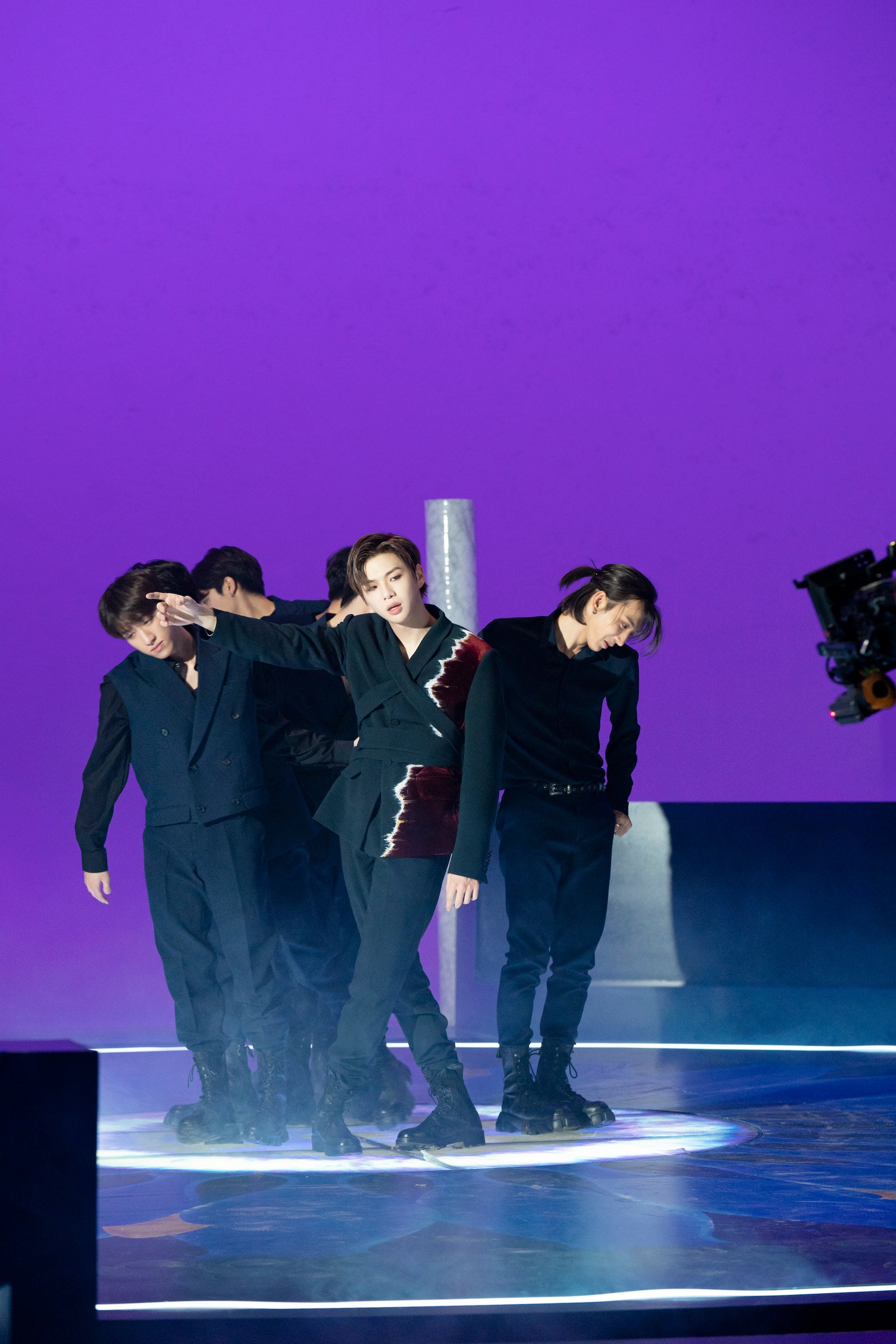 If you've ever watched Kang perform, you can just tell he's a fire sign. He shifts from bashful to boldly charismatic with one single note. "Freedom of personal expression matters a lot to Saggitarians," Jeon says.

Kang truly senses this energy, too. "I feel the proudest of myself when I'm performing," he reveals. However, these days, it's not as enjoyable to get onto stage for online concerts and TV shows because Kang can't feed off the energy of his fans. "It's just not as fun," he laments repeatedly.

Prior to the pandemic, performing took Kang all over the world, which is the perfect job perk to satisfy the perpetual wanderlust of a Sag. He's traveled to New York City, Los Angeles, Melbourne, Taipei, and Bangkok — just to name a few — with K-pop boy group Wanna One before it disbanded in 2018, as well as for fan meetings for his solo debut.

Picking just one favorite place is a difficult task for Kang, though. "I've always enjoyed all of the cities I've gone to," he says. "It's always fun for me to perform no matter where it is. But just personally, I like cities where you're able to ride a boat." I don't need to have Jeon's insight to comment that this is typical of a Sag.

"They can't sit still," I remark, thinking about my antsy Sagittarian younger sisters. "They like to constantly travel to new places."

"They're really here to just live a very expansive life and travel either in body or in mind," Jeon adds.

Kang's exploratory nature flows into his work, too. When making music, he says he learns the most about himself. (Sagitarrian musicians, like Charlie Puth, thrive off of constantly experimenting and reinventing themselves through their songs, according to Jeon.) Since his solo debut in 2019, Kang has been writing his own songs — of course, with the help of his A&R team (which stands for artists and repertoire, FYI. Basically, they assist with artist development), he notes. "[They] will tell me, 'We think you would do really well if you did this,'" he recalls. More often than not, Kang will convince himself he can't do whatever they have in mind. "But then, I will try it out, and I'll be like, oh, it does look really great. It's those times when I would learn more about myself," he continues.

"I think the people around you are really important because when you come to a point when you don't trust yourself, it's really dangerous."

The most recent example Kang gives: the addition of the third track on Yellow called "Misunderstood," which is his response to the rumors and gossip that often swirl around him. Not only is it his head of A&R's favorite, but it is also mine. At first, Kang thought it was "too heavy." After getting into the recording studio with it, he realized it wasn't so bad after all. 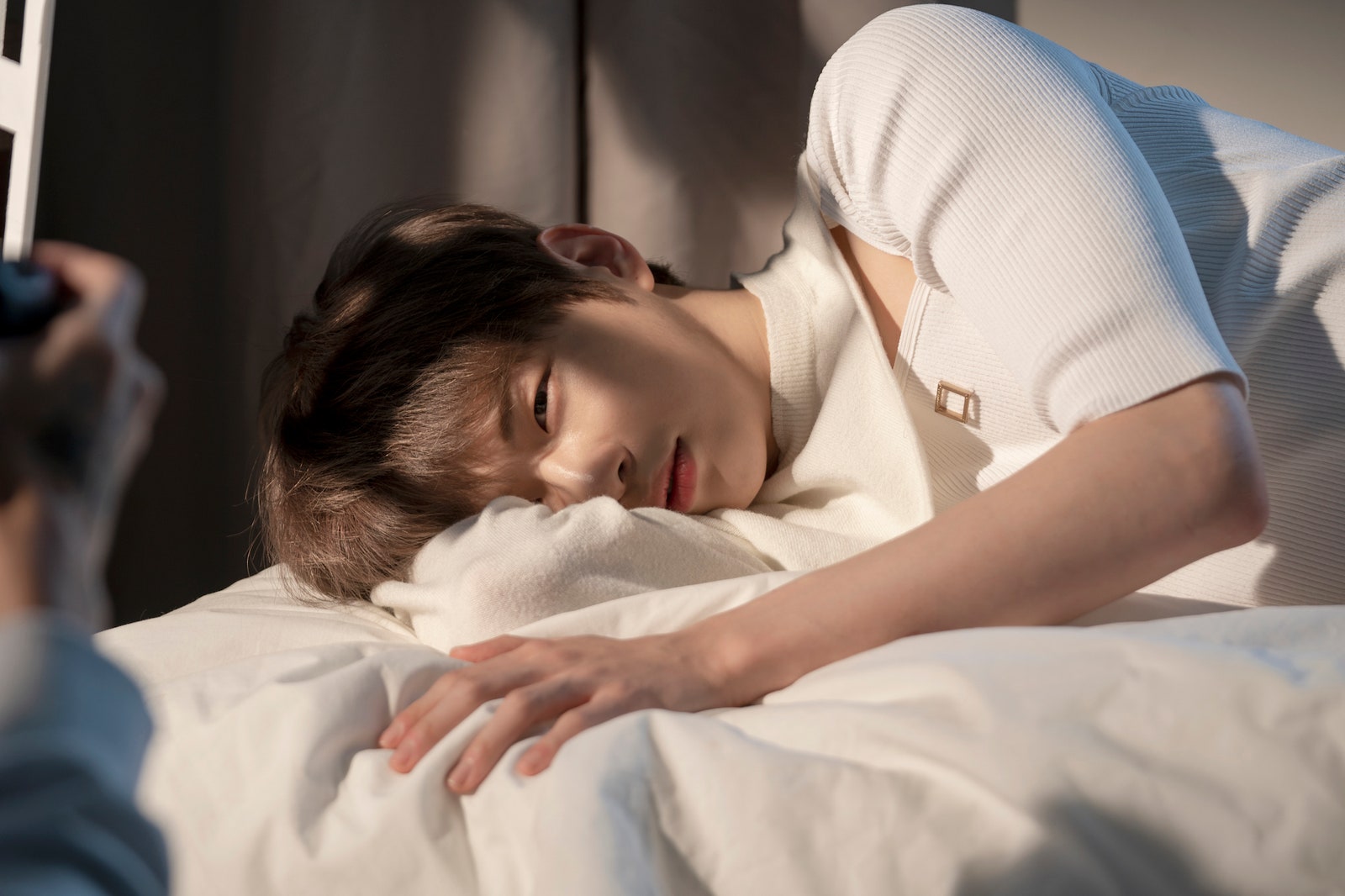 The third track on the new EP features a verse from Korean American rapper Omega Sapien of the alternative K-pop collective Balming Tiger. Again, his inclusion, as well as Wonstein on "Save U," was a trusted suggestion from Kang's team. "I'm the one that usually approaches the artists that I want to work with," Kang explains. "But a lot of the artists I like didn't fit with Yellow, so I listened to the opinions of my friends and my choreographer."

Because of the pandemic, Kang wasn't able to work with the other artists face-to-face. Instead, "We sent them the track and would tell them, 'This is what we did, feel free to do what you guys want to do,'" Kang explains. "Then, they would send it back. It was just a back-and-forth."

Although he is the founder and CEO of his label, Konnect Entertainment, Kang is a Sag after all. He's neither domineering nor stubborn with his staff like, say, a Capricorn would be. "It's funny, Sagittariusses actually make really great leaders because they're so encouraging, upbeat, and futuristic," Jeon shares. "They also have this baked-in paternal energy. They do want to create a safe environment for their employees to express themselves and explore. They can have agency over their own ideas."

When it came to putting together Yellow, these elements of Kang's astrologically defined work ethic definitely came into play. "It was more about all of everyone's opinions coming together more than just one person deciding," Kang says.

Yellow continues the CMYK theme of Kang's releases. He connects to each color of the trilogy — cyan, magenta, and yellow — equally. "They all represent a little bit of me," he says. After taking time to think about it, Kang later realizes his power color is black, mostly because it's the color he wears the most. "He's the K in CMYK," Kan's head of A&R interjects. "It's the K in the middle. He's the center of it all." 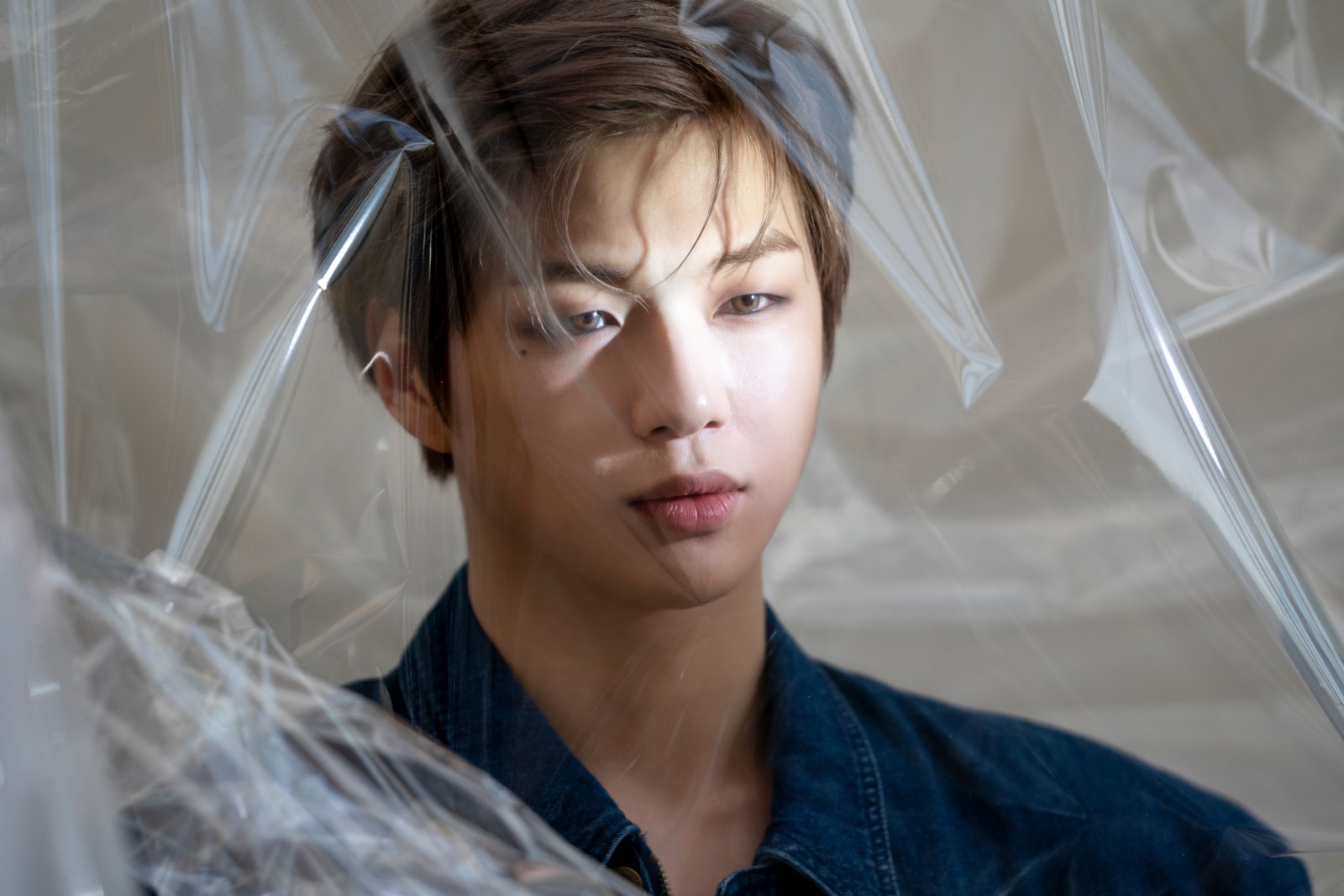 Before it's time for us to click Zoom's red Leave button, I ask Kang Daniel how he feels about the moon. (We'd just talked about his aforementioned love of stargazing, so this question wasn't as random as it may seem.) "I actually like the moon the most because you can see it the clearest," he declares with a smile as if I just unlocked his secret source of happiness. As someone with depression who also finds solace staring at the moon, I fully understand how the radiance of a full moon can offer a literal glimmer of light during dark times. The moon has become a reliable constant for me over the past year. Jeon notes she can sense that we get energy from following the moon phases.

Kang is not much different from temperate days if you think about it. (The same applies to many of us dealing with mental health issues.) Even through the nicest weather, the best of moods, a dark part of ourselves looms over us. But it doesn't have to be the worst thing. The moon is just a reminder to believe in the sunny days; the days that make you feel joy. Kang has been having a lot more of those at the moment. "These days, I'm actually very happy and life is very fun," he shares. "In the past, I was a lot more pessimistic, but lately, I just sort of go with the flow. I've changed a lot."