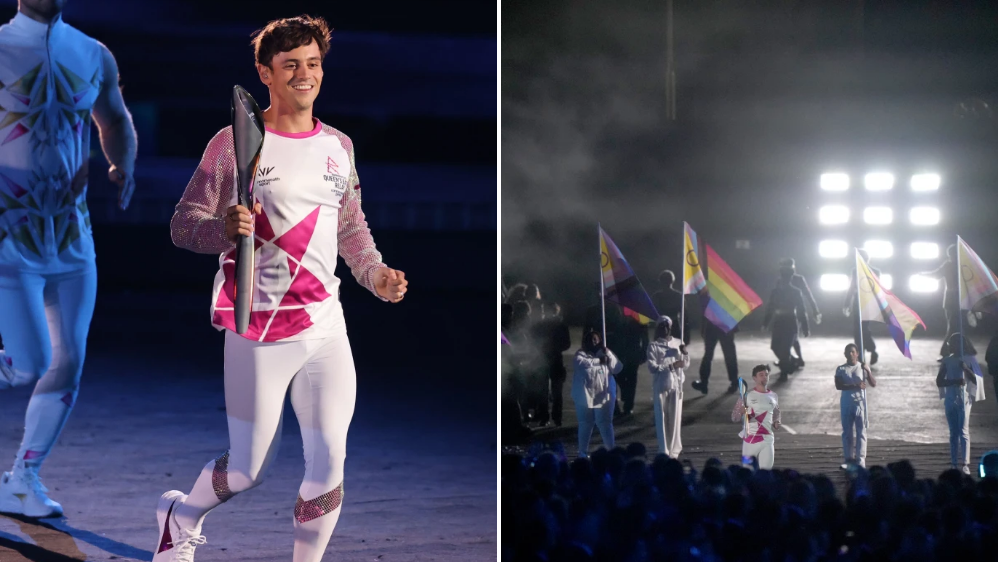 Tom Daley may have stolen the show at the Commonwealth Games opening ceremony.

Running out to an audience of thousands, the Olympic diver brought out the iconic baton, multi-coloured to represent the LGBTQ+ community.

The 28-year-old was also joined by members of Commonwealth nations where homosexuality is criminalised, such as Pakistan and Jamaica.

The activists jogged alongside Tom, who is married to Dustin Lance Black and looke superb in a white sports kits with pink sequined sleeves.

‘Tom runs in solidarity with all LGBTQ+ athletes and communities,’ a voiceover said.

Fans flocked to Twitter to praise the Olympian, with dozens of followers saying they were proud of Tom for flying the flag for LGTBQ+ people.

One wrote: ‘An important moment for LGBTQI#sports equality with @TomDaley1994 using his athletic platform to champion #LGBTQ rights across the #CommonwealthGames2022 thru the lens of #sport.’

‘May have just cried a little when I saw #TomDaley representing #LGBT+ peoples around the #Commonwealth, especially those in the many nations where it is still illegal to be openly #queer Thank you Tom,’ a user shared.

Another fan penned: ‘Watching @TomDaley1994 go out there tonight to represent all LGBTQ+ people in the Commonwealth made me so proud…I cried like a baby. It’s so brave. Why are we in 2022 and there are still some countries that punish people for being LGBTQ+???’

Ginny looked spectacular as they hovered over the Alexander Stadium in a lemon-shaped hot air balloon to kick-start the sporting event.

Tom will also front a documentary for the BBC to shine a light on the fact that many Commonwealth competitors live in fear of horrific brutality inside the countries they represent.

Tom Daley: Illegal To Be Me, follows Tom on his journey to some of the Commonwealth’s most homophobic countries to ask what the sporting world can do to help.

Tom Daley: Illegal To Be Me will air on Tuesday 9 August at 9pm on BBC One.