The night Tom Jones got me all shook up with Elvis: As the Voice of the Valleys turns 80, his friend JIMMY TARBUCK remembers the most exciting encounter of his life

One night in Las Vegas in the late-1960s, when Tom Jones was the stellar headline attraction at the Flamingo Hotel, he said to me, ‘I’ve got a thrill for you, just come with me.’

Tom was the most famous British singer in the world at that time. If he was excited — and I knew from the sparkle in his eyes that he was — whatever he was planning had to be pretty special.

I got in the limo and it took us over the road to the International Hotel, practically opposite. We had to drive because nobody walks in the States. 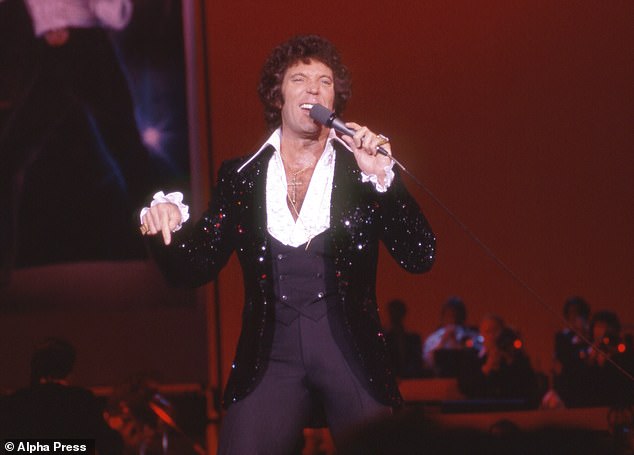 In the late 1960s, Tom Jones (pictured playing at Ceasar’s Palace in Las Vegas) was most famous British singer in the world

There was a billboard outside the International that just said He Is Here. That was all. I walked into the hotel lobby with Jonesy, which was like walking in with the Good Lord himself, and next minute we were in Elvis Presley’s dressing room.

I can’t believe that it was more than 50 years ago, and that my great mate Tom was 80 years old yesterday. I can’t believe I am 80 either — but it’s true.

We used to come on stage in Rolls-Royces — we come on in wheelchairs these days. Tom’s will be gold-plated, though.

I want to send him all my best birthday wishes. Because my Welsh mate and I have had some great times together. There was that night around Christmas, in the early Seventies, when we went for a game of darts with Engelbert Humperdinck.

Tom had bought this mansion in Surrey. It had about 17 rooms and a swimming pool with the Welsh dragon picked out in tiles under the water. Engelbert lived up the road from Tom, in St George’s Hill, Weybridge.

It was Christmas, a bunch of us went to the local pub, and Engelbert fancied his chances with the arrows.

The lad could play a bit, but the problem was he had started drinking with the big boys — pints of bitter with a champagne chaser. Tom could down those like water.

Engelbert tried to keep up and ended up almost passing out. We helped him home — but there was a long path and a flight of steps up to the front door. Engelbert wasn’t going to make it on his own, so Tom picked him up and carried him. 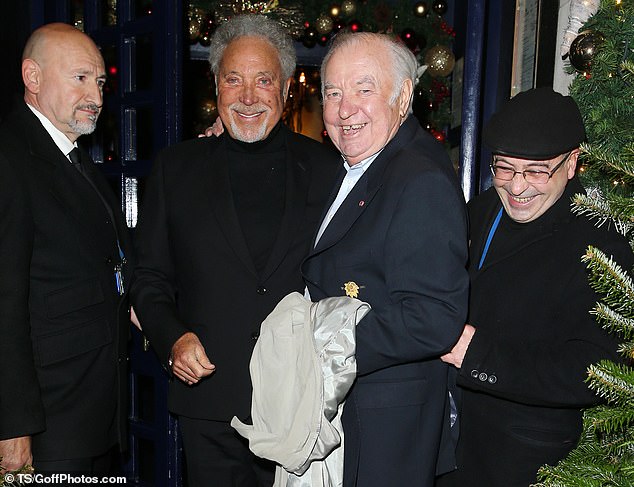 His wife Pat said, ‘What have you done to my husband?’

I love Tom Jones — the guy is a good laugh. He used to be a good drinker, but he’s stopped that now. We’ve had many exploits together and, every time we hit the town, I feel proud to introduce him as my friend.

If we’re meeting other people, I never tell them who’s coming — I just say I’ve got a mate of mine with me.

When people see him, their mouths fall open. He’s a genuine superstar, showbiz royalty, and there’s not many who ever experienced the kind of fame he has.

We met in the mid-Sixties when he had his debut hit, It’s Not Unusual. I was in my first season as host of Sunday Night At The Palladium on ITV, and I knew the power of that show to make stars.

Well, there were only the two channels, BBC and ITV, and what was on the BBC was probably rubbish, so everyone watched us.

We regularly drew 20 million viewers, and pop managers were desperate to get their acts on the bill.

Any song that was halfway good could be in the Top Ten after a Palladium performance. And a great song was guaranteed to go to No 1.

Anyway, Tom Jones was appearing in the show. I watched him in rehearsals and I had no doubt that I was listening to Britain’s next No 1.

It’s Not Unusual is still a great song with a unique sound. I tell Tom that I helped send it to the top of the charts but, the truth is, that man was unstoppable. He was always destined for mega success.

The Palladium gig was astonishing. I still get goosebumps remembering it. The audience went wild for him, his driving energy, the way he was bouncing around the stage. He was so young. I was so young.

We have been pals ever since that first Palladium show. He came back three times, and every night was magical. There was no one in all the business whose voice could compare.

It’s a travesty that he has never been inducted into the Rock & Roll Hall Of Fame because he is Little Richard and Sinatra all in one package.

Plenty of people would have let talent like that go to their heads. Tom has always been a modest man, kind and just plain nice.

We simply enjoy each other’s company. When I used to drop in at his house, his son called me Uncle Jim, and still does.

His late wife, Linda, always made me and my wife, Pauline, feel welcome, and we were always glad to give them dinner round at ours.

He can sing with anyone, from Pavarotti to Rod Stewart. But I saw the greatest duet of the lot — with Elvis. I was at the front of the audience in the Flamingo, still pinching myself, unable to believe that half an hour before, I had been standing in a backstage dressing room with the two greatest singers on the planet.

When Tom had ushered me into Elvis’s presence, that night in 1969, I have to confess I was overwhelmed.

I stared at him, stunned. One of Elvis’s assistants said to me, ‘Sir, will you give this drink to Elvis?’ 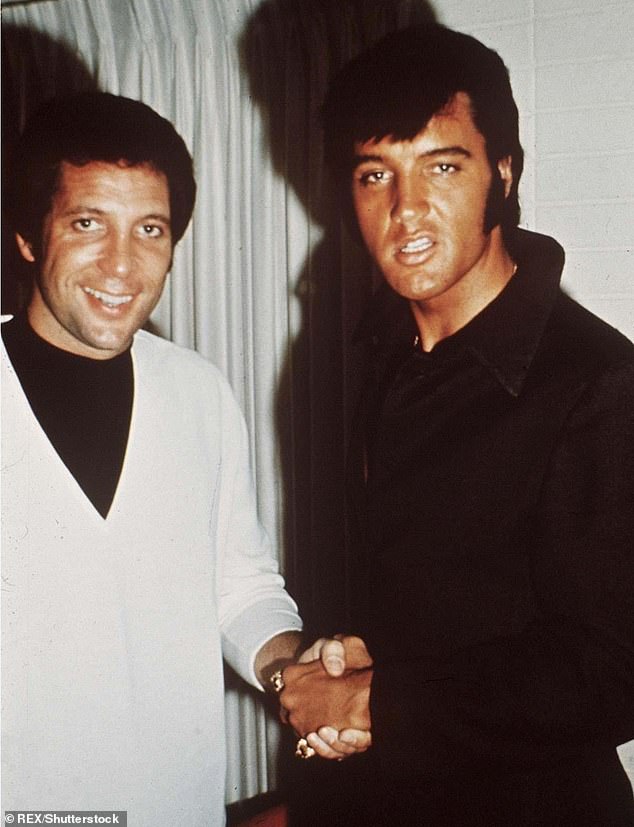 According to Jimmy Tarbuck, Sir Tom’s (left) duet with Elvis (right) in 1969 was the greatest he ever saw – and the Welsh star has sang with a lot of famous artists!

I said, ‘Yeah,’ took the drink and stood there gaping, like a stagestruck schoolgirl. Couldn’t move a muscle.

Tom nudged me and said, ‘Give ’im the drink for God’s sake, boyo.’ Next night, Elvis came to Tom’s room. I was in heaven. They had become great friends in Hawaii.

There I was, just a stand-up comic from Liverpool. I couldn’t believe it.

After a while, I found my tongue, because I’m never speechless for long, and I asked Elvis why he’d never played in England. He was very charming and said, ‘Well, I’ve never had the opportunity.’ I told him he could fill Wembley stadium: this was in the days before bands played there regularly, and he hadn’t heard of it.

When I said it was a ‘soccer stadium’, he asked how many it could hold. I guessed 100,000 and he said, ‘Come on. I couldn’t get an audience like that.’ He genuinely didn’t know how much the British loved him.

I told him there were a lot of English people who had flown to Las Vegas just to see him, and he said he would have a word with his manager, Colonel Tom Parker, about maybe visiting London. It never happened, sadly.

But what you have to understand is that in Las Vegas, Tom Jones was equally as big. And together, they were the biggest thing even that town has seen.

That night, Elvis walked on stage in the middle of Tom’s act and the place erupted. It wasn’t planned. The two of them roared with laughter and did a number together, and then Elvis left to do his show over the road.

Jonesy told me, ‘Right, he’s not getting away with that.’ The next night he walked on to Elvis’s stage. The audience could not believe their luck.

Elvis always said it was Tom who got him touring again after making all the movies. He saw the excitement that Tom generated on stage and he wanted to get the same feeling.

The buzz in the room before Tom Jones steps out is so electric, your hair stands on end.

I’ve seen him live so many times, I can sense the moment when he will appear. There is no big drum roll. Two guitarists come on and tune up and, if you watch the back of the stage, you will see this character walk out of the darkness. It’s sensational.

Happy birthday to my great mate. If you know him, you love him. In the words of Tina Turner — he’s simply the best.

Tags: jones,, night, sang, the,, Tom, with,
You may also like
Recent Posts
Hot News