Queen Elizabeth II watched the first day of her Platinum Jubilee celebrations from the Major General’s Office. But when the Trooping the Colour parade ended, she stepped out onto the balcony of Buckingham Palace and waved to the crowd. 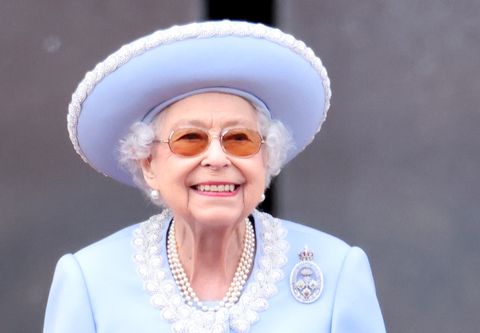 For the brief appearance—for which she was joined by Prince Edward, Duke of Kent—the monarch wore a dusky dove blue Charmelaine wool dress and jacket embellished with pearl and diamante trim around the neckline and cascading down the front of the coat. She paired the look with a matching hat with a turned up brim embellished with a pearl and diamante trim, and white gloves.

The look was designed by Angela Kelly, the queen’s longtime confidant and wardrobe adviser, who, with the royal’s permission, published The Other Side of the Coin: The Queen, the Dresser and the Wardrobe, a behind-the-scenes look at life working in the royal household, offering intimate anecdotes from her 25-year relationship with the queen.

The queen wore the same suit for her Platinum Jubilee portrait, which was released yesterday.

For jewelry today, she wore pearl earrings and a layered pearl necklace, as well as her diamond Brigade of Guards Brooch, which she wears every June for Trooping the Colour, which is meant to be her official birthday parade.

The Guards Brooch—made with natural diamonds—once belonged to the monarch’s grandmother, the late Queen Mary. It combines the badges of the five regiments of the British and Commonwealth armies—Grenadier, Coldstream, Scots, Irish, and Welsh Guards—which take turns each year “trooping their colours” for the queen. The symbols are enclosed in an oval frame with the Latin phrase, Quinque juncta in uno, which in English means, “Five joined as one.” And on top of them sits a crown.