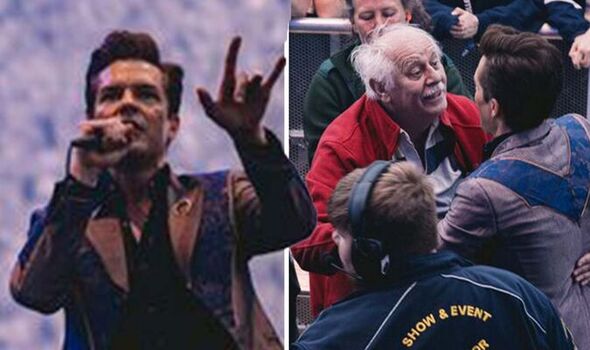 The Killers suddenly stopped their concert at Manchester’s Emirates Old Trafford stadium on Saturday when frontman Brandon Flowers became concerned that someone was injured.

After looking closely, Brandon discovered that the commotion in the crowd had been caused by a crowd surfing pensioner named Billy.

As the elderly man was pulled away from the sea of people, Brandon questioned whether the rocker should be crowd surfing at his age.

Then, the Las Vegas native jumped down from the stage to check that the pensioner was alright.

The crowd erupted into applause when Brandon put his arm around the gentleman and gave him a big hug.

When he returned to his set, Brandon told the crowd: “I said Billy, what ya doing?”

Brandon then tried his best to mimic a Mancunian accent when he revealed the pensioner’s brilliant reply.

The moment was a hit with the people in the crowd and many took to Twitter afterwards to praise the band.

Leo wrote: “Tonight I witnessed a 70-year-old man crowd surf at The Killers.

“When Brandon Flowers asked him why he did it, he said ‘I’m just enjoying myself’.

“Bro this 70-year-old man has changed my outlook on life.”

Gill added: “Just going to listen to Brandon Flowers saying ‘I’m enjoying meself’ in a terrible Manchester accent for the rest of the day.”

While Charlotte echoed: “Brandon Flowers making sure that Billy the grandpa crowd surfer was okay.

And Lisa gushed: “The moment after ⁦Brandon Flowers stopped the gig and left the stage to help an elderly Manc gentleman, Billy, who had to be lifted from the front of the crowd and gave us his best Manc accent.”

The Killers are currently travelling the world on tour.

The gigs were originally due to take place in 2020 but had to be postponed due to the Covid pandemic.