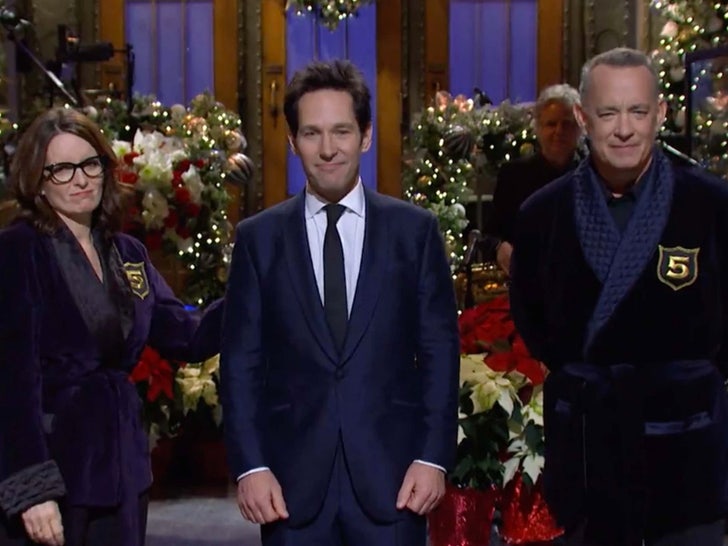 Thanks a lot, COVID … poor Paul Rudd‘s feeling “extremely disappointed” his 5th time hosting ‘SNL’ turned into a patched-together show with almost none of the regular cast, and 2 big guests.

As we reported … multiple ‘SNL’ staffers had tested positive, and Lorne Michaels decided to pull the live audience and most of the cast. Tom Hanks and Tina Fey opened the show, explaining most of that, and then did what they were really there to do … induct Paul into the 5-timers club.

Kenan Thompson brought out Paul’s 5-timers robe … but joked Rudd was really only hosting 4 and a half times.

Most of the show was a best of previous holiday episodes with a few fresh pre-recorded videos from earlier in the week. Tina stuck around to do Weekend Update with Michael Che. She immediately addressed Jost’s absence saying, “It’s not what you think. He’s getting some work done.”

She and Che didn’t even sit behind the usual update desk … and instead sat on the main stage, delivering their jokes to Kenan, Tom and Paul.

Che had the night’s most timely joke when he did a news item about the judge in Louisiana who was caught on video saying the N-word — saying it’s “the kind of story that makes me wonder, why are me and Kenan the only cast members here?”

As we’d told you … even musical guest Charli XCX was scratched hours before the broadcast due to the scaled-down production — but she did appear in one of the pre-recorded bits.

The show DID go on, but felt more like the at-home episodes ‘SNL’ pulled off during quarantine.