Sharon Stone paid tribute to one of her most iconic roles. See the pic.

Been there, done that. Sharon Stone paid homage to one of her most iconic films on Instagram on June 28. The actress, 63, shared a photo of herself in nothing but a t-shirt of her character Catherine Tramell from the Basic Instinct film franchise. The black tee has an animated version of the antagonist in her signature white outfit with a cigarette in tow, depicting the police interrogation scene from the film.

“Been there, done that,” Sharon captioned the post, holding up a cigarette to mirror the scene. The actress also tagged, presumably, the artist of the t-shirt, Shelly Goldstein. In that particularly notorious scene, Catherine reveals she isn’t wearing any underwear after uncrossing her legs.

The homage comes after Sharon opened up about the difficulties of shooting such an explicit scene in her memoir The Beauty of Living Twice, which came out in March. In an excerpt, Sharon wrote that she was instructed to remove her underwear under the pretense that her privates would not be visible in the film. The actress recalled seeing the film after wrapping with a “room full of agents and lawyers, most of whom had nothing to do with the project” — and “that was how I saw my vagina-shot for the first time, long after I’d been told, ‘We can’t see anything — I just need you to remove your panties, as the white is reflecting the light, so we know you have panties on.’” 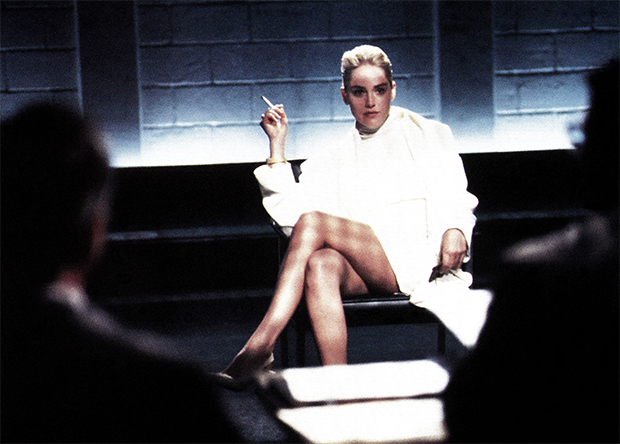 Sharon wrote, “Yes, there have been many points of view on this topic, but since I’m the one with the vagina in question, let me say: The other points of view are bullshit.” Sharon then revealed that she “slapped” director Paul Verhoeven and called her lawyer. After pushback from the director, Sharon ultimately agreed to keep the scene in the film. Despite the troubles, Sharon said she was proud of the film and how it challenged her as an actress. “I can say that the role was by far the most stretching that I had ever done in terms of considering the dark side of myself,” she wrote.