Every new adaptation of Philip Pullman’s best-selling novels is greeted with huge excitement by his many fans.

How will they capture the author’s adventure, which races through magical worlds and parallel universes?

And how will they bring to life the animal daemons, which are a unique expression of each character’s soul?

The 2007 film (starring Nicole Kidman) and subsequent TV series (with Ruth Wilson) had the luxury of computer animation.

But Nicholas Hytner, the Bridge’s artistic director, keeps faith with the theatricality of the puppets and projections from his 2003 production of His Dark Materials, back when he was boss at the National.

That starred Anna Maxwell Martin as Pullman’s heroine, Lyra Belacqua: the girl destined to save the world.

Pointedly timed for Christmas, The Book Of Dust is the prelude to Pullman’s supposedly anti-Christian trilogy and is the tale of Lyra’s nativity.

We follow gutsy young Malcolm, the bright, independent-minded son of an innkeeper (more seasonal echoes), tasked with saving Lyra from the Magisterium’s religious Gestapo or ‘CCD’.

Once again, Bob Crowley’s design saturates us in the book’s dark, brooding dystopian nostalgia of a lost Oxford consumed in a Biblical flood (the Almighty may have serious copyright issues with Pullman when he eventually shuffles off this mortal coil).

Projections on screens around a stage which thrusts into the auditorium present picture-book graphics, with shimmering trees, seething rivers and wind-swept fens.

As it did at the National, the puppetry stands out, with every actor having their own paper lantern daemon — rather like a personalised Christmas decoration (the main characters have theirs operated by puppeteers wearing woolly hats and dungarees).

But Hytner also toys with scale, as when Malcolm’s tiny canoe (La Belle Sauvage of the title) is caught in floods and he’s rescued by Lyra’s father, Lord Asriel, in his miniature ‘gyro-copter’.

Pulling all this together is quite an achievement, but it comes at a cost. We’re left with a frenetic performance, fearful of stopping to reflect. There is certainly little prospect of taking time to ponder Pullman’s gnomic revelation that ‘dust is only a name for what happens when matter begins to understand itself’.

The characters in Bryony Lavery’s Famous Five-ish adaptation feel like puppets of the plot. With Pullman setting up simplistic conflicts between religion and science, the men of the Magisterium (including a reptilian Nick Sampson) are merely straw Nazis.

At least the warm-hearted nuns who hide baby Lyra get more colour — including Dearbhla Molloy as the sort of lyrical Irish nun everyone likes to believe in.

A real-life, gasp-inducing baby is interchanged with a doll for Lyra, to raise the sometimes faltering stakes.

But the standout performance is from newcomer Samuel Creasey as our hero Malcolm. Just out of drama college, he is James Corden, Mark II: a stout, cheeky youth who turns the otherwise earnest Malcolm into a loveable clown.

As his gobby accomplice Alice, Ella Dacres is notable for her excoriating tongue, including one line worthy of a Glaswegian navvy: ‘The CCD are here with a stuck-up b**** and the nuns are s****ing themselves.’

The ‘stuck-up b**** in question is Lyra’s wicked mother, Marisa Coulter (Ayesha Dharker), who has been transformed into a Priti Patel lookalike — her officious character even gets to invoke ‘emergency powers’. Could Sir Nicholas be making a point?

Inevitably, there is solemn reference to climate change and even workplace sexism.

The latter reaches its queasy apotheosis in Pip Carter’s paedophile scientist Gerard Bonneville, who preys on Alice and tries to kiss her. Yuck! Some parents may prefer not to expose their children to this.

Elsewhere, I struggled to share Malcolm’s faith in John Light’s slightly drawn Lord Asriel. We must assume Light hopes for a bigger role in the next instalment.

But my main problem is that neither Pullman’s story, nor Hytner’s production, feel as though they are covering any new ground.

Isn’t this yarn — about a child messiah, hunted by the authorities — basically a re-run of His Dark Materials?

Haven’t we all been here before . . . and got the alethiometer?

This Robin is Strictly Come Jousting

Verdict: Robin and the Merry Men rather miss the target

Bonnie Tyler’s 1980s hit Holding Out For A Hero sets the tone for this year’s Christmas show at Bristol Old Vic, which dusts off the story of Robin Hood.

Thanks to a kind librarian who has dug up a poster of The Prince Of Thieves, starring Kevin Costner, and an old book, Tales Of A Forgotten Forest, introverted, innocent schoolboy JJ (cuddly Dorian Simpson), turns time-traveller.

He falls, with a bump, into Sherwood Forest, where the nasty narcissistic Sheriff of Nottingham, who makes his entry blowing his own, er, trombone, is clamping down on those who can’t afford to pay their taxes.

Otherwise, things have moved on since medieval times. 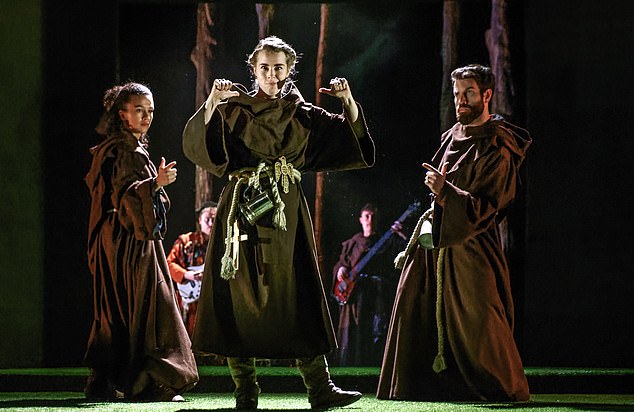 Thanks to a kind librarian who has dug up a poster of The Prince Of Thieves, starring Kevin Costner, and an old book, Tales Of A Forgotten Forest, introverted, innocent schoolboy JJ (cuddly Dorian Simpson), turns time-traveller

Robin Hood has retired from being a legend. She is a girl; and she and her ex, Maid Marian (a terrific boxer), are avoiding one another. Friar Tuck is a female monk who has hit the ‘holy water’. Will Scarlet is distracted, having become a dad (his dad-dancing scene is a highlight).

Somehow JJ forces a comeback of the Merry Men, if more in the mode of Ocean’s Eleven.

Recharged with a blast of that irresistible music from the original movie and the old team-spirit, they plan an ingenious heist to retrieve the stolen dosh from the castle vaults.

It’s action-packed, punctuated by cheery sing-alongs of Bryan Adams’s Everything I Do (courtesy of the 1991 Costner movie).

It’s also tactfully right-on, without being uncomfortably in-yer-face. And it’s stuffed with wholesome lessons: that heroes come in all guises, including overgrown kids, girls, old women and dancing dads.

As does heroism, because it takes real courage to reach out and be friendly.

The fencing is fantastic; the kissing restrained (credit to Fight and Intimacy Directors).

Entertaining and enjoyable but without real edge or spark, it hits the target as Strictly Come Jousting, but rather misses the X Factor.

The Emperor has a blond shock wig and wears an ill-fitting blue suit — and clown shoes.

I suspect the Prime Minister will be the butt of many a joke during this pantomime season, and writer Vikki Stone leans to the satirical in this uneven but good-hearted run out of Aladdin.

The Emperor (Kate Donnachie) wants to marry off his daughter, Jasmine (Ellena Vincent), to a rich prince. But she’s having none of it. Along comes lovelorn Aladdin (Qasim Mahmood), and he has to work hard to win her over.

The Emperor’s palace looks suspiciously like the infamous new Downing Street briefing room, where evil henchman Abanazer (an excellent Irvine Iqbal) issues diktats while barking ‘next slide . . . next slide’, and plots to marry Jasmine himself.

Much of the humour is aimed at the adults and the Boris Johnson satire doesn’t entirely gel. But Vincent and Mahmood have chemistry as the young lovers, the singing is top-notch, and the ‘magic’ carpet ride will enthral the youngsters. 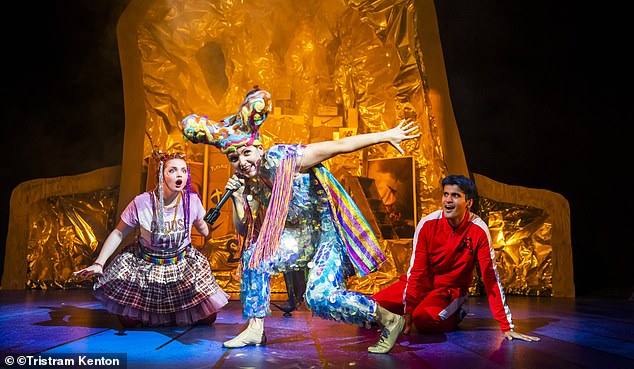