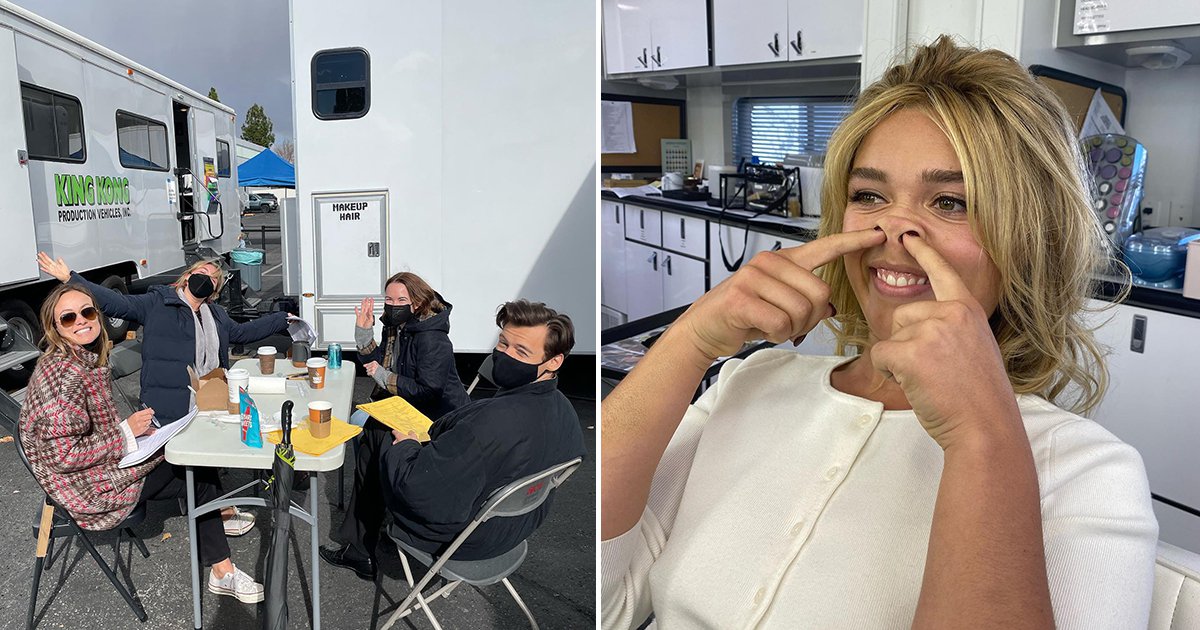 Olivia Wilde and Florence Pugh have shared celebratory photos of each other behind the scenes of Don’t Worry Darling to mark its release.

The psychological thriller, directed by Wilde and which stars Harry Styles alongside Florence in the leading roles, was released this week to major excitement from fans.

Don’t Worry Darling had an incredibly dramatic and headline-stealing publicity run, featuring awe-inspiring drama at the premiere including a genuine debate over whether Harry had spit, spit, on his co-star Chris Pine in full few of cameras (spoiler alert: he didn’t.)

The release comes amid rumours of tension between Olivia and Florence, with the Midsommar actress having limited her promotion of the flick to just Venice Film Festival.

And on the day of the film’s release, a new source claimed that the women got into a ‘screaming match’ on set, with Warner Bros bosses having to intervene to ensure Florence would finish filming the movie.

Now the pair have shared some behind-the-scenes photos from Don’t Worry Darling to celebrate the film’s international release, featuring the cast and crew spending time together between takes – and from the photos it all looks totally drama-free.

Olivia shared a sweet snap of the stars going over lines outside a trailer during the film’s production, with Harry, Olivia and Florence each posing for the shot, Florence throwing her arms out wide.

‘I’m so deeply grateful for this experience, and for the extraordinary effort of the group of artists who made it happen. We got together to tell a story for you, and we hope you have fun with it.’

Florence, meanwhile, shared multiple behind-the-scenes snaps, from the cast relaxing in the desert between takes to her sitting in hair and makeup.

One snap sees her and Olivia in full 1950’s-style get-up in what looks like it could be a still from the film itself, while another playful photo sees Olivia sticking her fingers up her nose.

Seemingly more than ready to keep the rumoured drama on the sidelines, Florence shared the photos to her 8 million followers with the caption: ‘It’s here.. and ready to be seen.

‘We met so many talented people, visited some insane locations, worked hard in the desert dust and looked good whilst doing so,’ she wrote, thanking the hair and makeup team.

‘Thank you to all those who have bought tickets and those who have already seen it,’ she went on, reflecting on the massive amount of work that went in to producing the film.

‘This film was such an epic story on such a large scale to shoot, all while during peak Covid times. For that I will always be grateful.

‘To all of you who helped make this, your dedication and love was seen daily – thank you.’

While Don’t Worry Darling has been receiving mixed reviews from critics, the gssip around the cast means it has become one of the most eagerly-anticipated films of the year.

Olivia has continuously heaped praise on her leading actress in interviews, stating she did an ‘exquisite’ job, and addressed the rumours of a rift in an interview with Vanity Fair where she said it was ‘ironic’ people were focusing on gossip in a film centred on the ‘incredible power of women.’

‘It is ironic that now, with my second film – which is again about the incredible power of women, what we’re capable of when we unite, and how easy it is to strip a woman of power by using other women to judge and shame them – we’re talking about this,’ she said.

She clarified that Florence’s character, Alice, is on a challenging journey and a ‘cataclysmic existential breakdown’ throughout the film, which put may have Florence in a different mindset to her castmates.

‘My tendency is to be everyone’s best friend and to socialize, and I think she often just needed the time and space to focus, so the way I supported her was to give her space and to be there if she needed anything,’ she continued.

‘Florence was very focused on turning out that performance, which I can assure you took all of her energy.’

Don’t Worry Darling is out now.