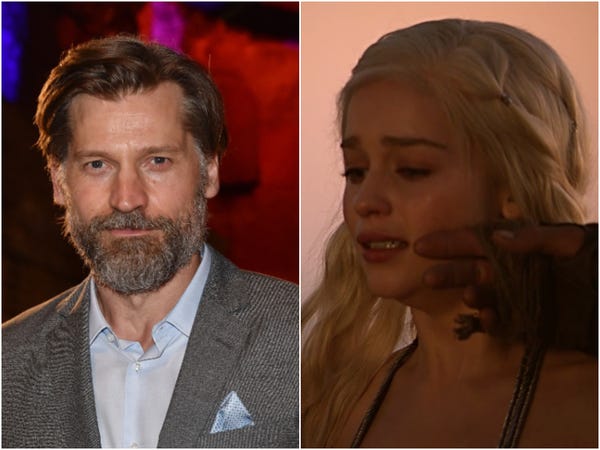 In an interview with The Times, "Game of Thrones" actor Nikolaj Coster-Waldau said the season one sex scene Emilia Clarke had to shoot was "tough and degrading" for her to play.

The Jaime Lannister actor discussed the controversial scene from the show's inaugural season in which Clarke's Daenerys Targaryen is raped by Jason Mamoa's Khal Drogo.

"For Emilia to play that in series one was really tough and degrading, because what that character goes through is horrific. She's sold to a guy who rapes her, but her way of getting through that is a massive journey, right?"

Coster-Waldau, who is promoting his new movie "The Silencing," agreed that Daenerys' eventual rise to power displayed how the show changed its treatment toward women, but said: "It's also in the books."

The actor added that many women in the show were in positions of power. One of these women was his on-screen sister and lover Cersei Lannister, played by Lena Headey.

"Cersei, too, was never looked upon as an equal to her brother just because of gender. But then she rises to the top. And you could argue that the way those two women turned out was because of being raised in this horrific way," Coster-Waldau said.

However, in James Hibberd's recently-released behind-the-scenes book "Fire Cannot Kill a Dragon," "Game of Thrones" author George R.R. Martin said that the decision to have Daenerys raped in this scene made the episode "worse, not better."

Martin said: "Why did the wedding scene change from the consensual seduction scene … to the brutal rape of Emilia Clarke? We never discussed it."

Coster-Waldau, who played Jaime in 55 episodes of "Thrones," including the very first and very last, also weighed in on the show's much-criticized ending in his interview with The Times.

He said that perhaps the horrific, season one rape scene resulted in Daenerys' surprising decision to burn Kind's Landing: "That's the storytelling, and it's interesting."

He told The Times that he also finds it "interesting" that people were so angry with the show's ending.

"Because when you meet people, they're not angry at all, are they? Then they get behind a keyboard and get opinionated and write a petition. I did a round table with hardcore fans, and we were all talking about the ending and what I found was that, yes, most had another idea for what would have been a great ending, but, ultimately, they just didn't want the show to end."