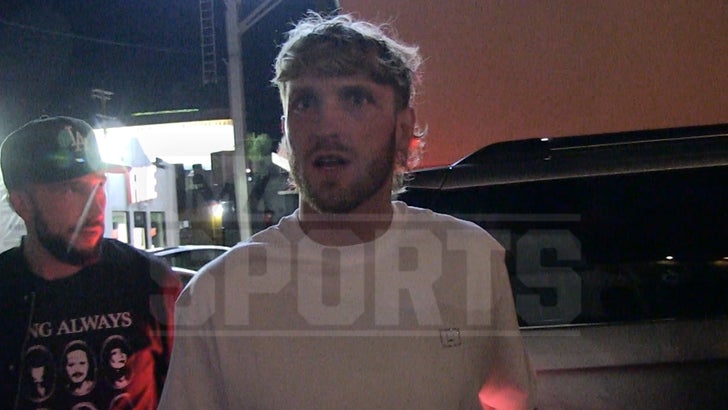 Logan Paul is taking his rivalry with Floyd Mayweather to the courtroom — the YouTube superstar tells TMZ Sports he’s planning to sue the legend … claiming he still hasn’t gotten paid for their exhibition fight in June.

Logan has been vocal claiming he hasn’t gotten a dime from the 50-0 boxer following their popular bout at Hard Rock Stadium last year … and he says he’s so pissed about the situation, he’s going to file a lawsuit.

“It’s honestly bulls***,” Logan said outside Saddle Ranch on Thursday. “Like, having people who aren’t a professional promotional company control where the money goes, we made that mistake,”

“It’s Floyd Mayweather. Before we fought him, we were kind of willing to do whatever. Now after the fact, we’re kind of shooting ourselves in the foot because he’s a “f***ing scumbag.”

FYI — Floyd has made a killing over the course of his career … and reportedly made over $300 million for his Conor McGregor fight alone.

The Logan vs. Floyd fight raked in a ton of cash … but so far, Paul claims he hasn’t gotten what he deserves for his involvement.

Logan has a bit of advice for whoever steps in the ring next — “don’t let him control the money.”

Paul also says Floyd has hit him up for a rematch … but his response was simple — “suck a d***.”

The silver lining?? Logan says the Floyd fight was a career highlight … calling it one of the most incredible experiences of his life.