Kim Kardashian has stunned in a black string bikini and dark shades while posing on the beach in front of a row of palm trees.

Kim Kardashian, 40, has sizzled in her latest bikini pic! The KKW Beauty founder took to Instagram on May 7 to share a pic of herself in a black, stringy bikini. “MAYDAY,” she captioned the photo, which showed her posing on a tree trunk on a golden, sandy beach. She put one hand up to her head as she flaunted her toned physique in the black two-piece, and accessorized with dark shades.

Thousands of fans quickly jumped into the comments section to drop heart eyes and flame emojis on the mother-of-four‘s post. When the SKIMS founder isn’t posing for gorgeous IG pics, the Keeping Up With The Kardashians star has been spending plenty of time with her kids Saint, 5, North, 7, Chicago, 3, and Psalm, 2. Of course, fans would know she recently filed for divorce from Kanye West, and the rapper has been living on his massive Wyoming ranch, while Kim has remained at the family’s home in Calabasas.

“When they’re talking it’s strictly about the kids or business type of stuff and Kanye will FaceTime when he wants to see the children and Kim is really great about that,” a source told HollywoodLife on April 11. “He’s still seeing the kids they’re just keeping it all private and quiet and it’s not for long periods of time. She’s trying really, really hard when it comes to communicating,” the insider also revealed. 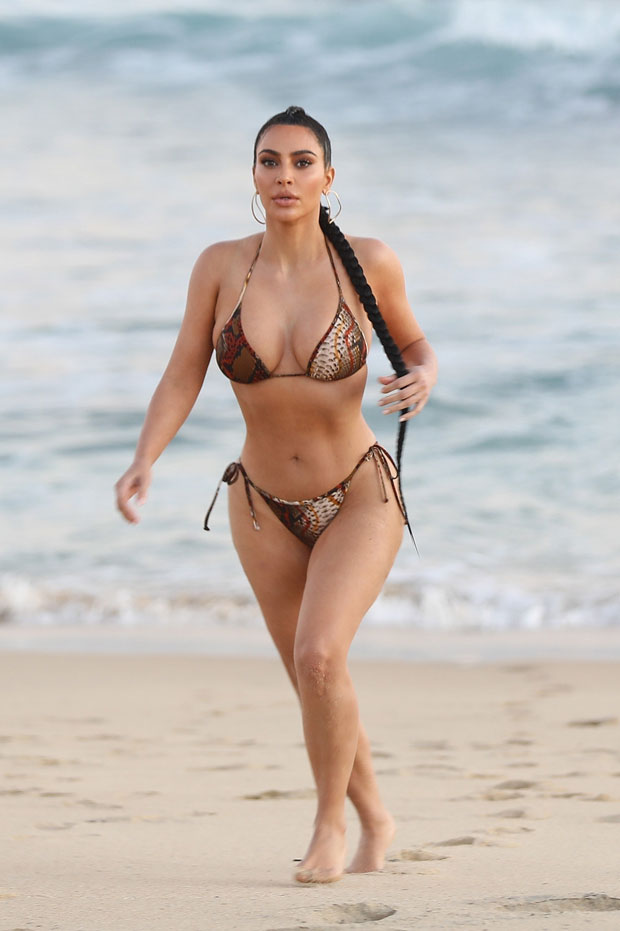 In the most recent KUWTK episode, Kim was seen crying after telling the crew that the show would be coming to an end after 20 seasons on E!. “It was just the hardest conversation that we’ve ever had to have. I think of you guys as my second family.”

Kim was also shown in tears telling her pal Simon Huck the sad news during a FaceTime conversation, “We ended Keeping Up With the Kardashians.” Then Kris is seen getting emotional, saying over the phone, “It’s hard. It’s just hard,” with Khloe asking her mom “Oh my god are you crying again?”