Looks like Kate Middleton is hoping to meet up with Meghan Markle and Prince Harry during her and Prince William’s upcoming trip to the United States.

Kate and William are heading to Boston for the Earthshot Prize Innovation Summit on December 2, and plan to spend some time in New York City afterwards—where Meghan and Harry will also be due to being honored at the Ripple of Hope Award Gala on December 6 .

Meanwhile, “Harry and Meghan are knee deep with their hectic schedules, but Meghan is willing to put in the effort as long as dates don’t clash.”

The Waleses and Sussexes last saw each other in England as the royal family mourned the Queen’s death. On top of staying just five minutes from each other in Windsor, the couples made a joint appearance to greet well wishers and look at floral displays. 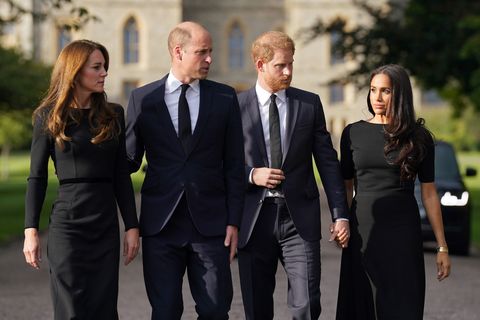 A source told Us Weekly that it “wasn’t an easy decision,” but “In the end, [William] elected to [invite them] because it was agreed amongst all of them that this very much the appropriate thing to do. For all of their differences in the past, many of which still linger, this was what the Queen would have wanted and William knew very well that it was no time to be holding onto grudges or distancing himself from his brother. They needed to put on a united front and pay their respects for her sake as well as the monarchy as a whole and the people she served so tirelessly during her reign.”

Here’s to hoping everyone gets a chance to meet up and mend fences in NYC.