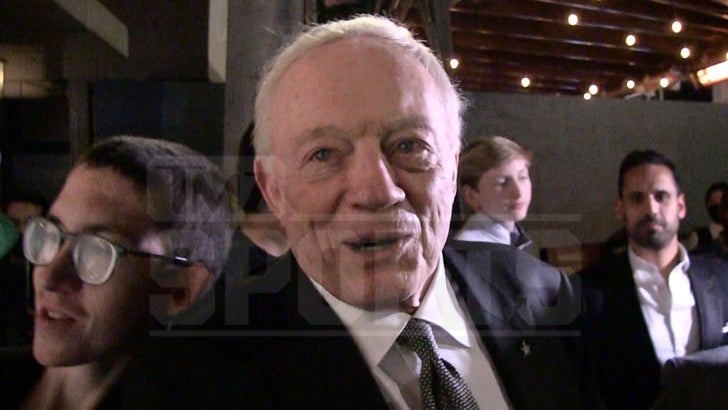 Jerry Jones is so disappointed over the Cowboys missing out on this week’s Super Bowl — he said he’ll be yelling into his pillow in Los Angeles this week lamenting it all.

The Dallas owner dropped the incredible line to TMZ Sports outside of Craig’s in L.A. on Thursday night … comparing the sounds of his upcoming sobs to an animal that’s been caught in a trap.

“When ya’ll hear what sounds like — over these Los Angeles hills — when you think they got one of these mountain lions with its tail caught,” Jones said, “that’s me screaming into my pillow for not being in that Super Bowl.”

Jones was smiling and laughing when he said the quote, but watch the clip — it ain’t hard to see the 79-year-old is truly bummed about not playing the Bengals for the title this weekend.

Of course, Jones’ Cowboys really didn’t even get close … they were bounced in the first round of the playoffs last month by the 49ers in a disappointing fashion.

Jones, though, doesn’t seem too upset at his QB for the early exit … he told us he believed Dak Prescott got snubbed for Comeback Player of the Year honors on Thursday night when he lost the award to Joe Burrow.

As for his former player, DeMarcus Ware, Jones said he was “disappointed” that the ex-pass rusher didn’t get into the Hall of Fame on Thursday … but he added that he’s sure it’ll happen eventually.