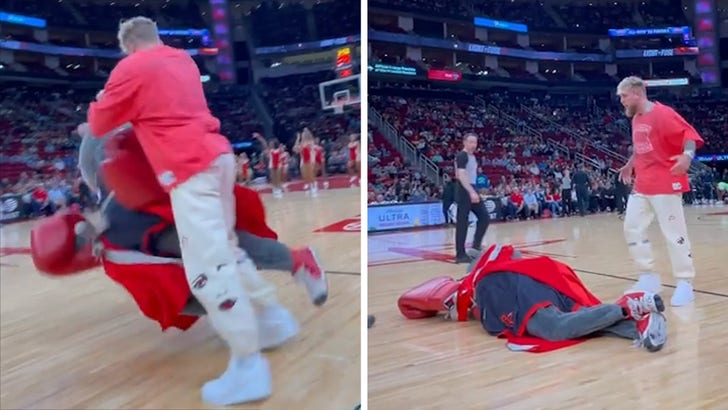 Tyron Woodley, Nate Robinson and the Houston Rockets mascot all now have something in common — each has been knocked out by Jake Paul!!

The Problem Child added “Clutch” to his KO victim list in a hilarious scene at the Rockets vs. Timberwolves game in Houston on Sunday — moments after the furry mascot challenged Paul to a “fight” near his seat.

In video of the “altercation” posted to his social media page Monday, you can see the Houston mascot came over to Jake with some comically large gloves on and challenged him to a boxing match.

At one point, the mascot appeared to tag Jake in the arm — which got the YouTuber out of his chair.

Jake then quickly put Clutch into his place, hitting the bear to the floor with a big right hand.

Paul talked a little smack and went back to his seat — and fans found the interaction hilarious.

Of course, the punch was all scripted and the mascot is OK … but Jake still had fun with it all on his Instagram page — writing in the video’s caption, “Will Smith’d em.”

No word yet on who Jake will fight for real in the next couple months … but it’s clear, no one is safe from his right hand!!