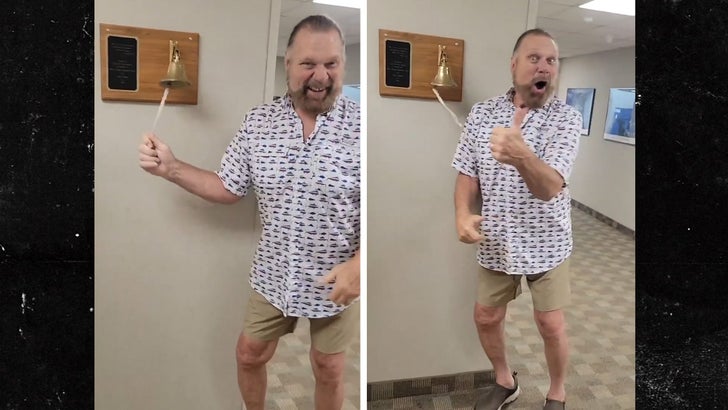 Great update from “Hacksaw” Jim Duggan … the wrestling legend just completed radiation treatment for cancer — and celebrated by ringing the bell at the facility.

The 68-year-old made the announcement with an IG video — just weeks after his cancer returned from a previous battle in 2021.

Duggan revealed in May he had to do 8 weeks of radiation treatment … and as of this week, he’s finally done with the grueling process.

“For eight weeks I’ve been coming by looking at this bell, listening to the other folks come by and ringing the bell and looking forward to it,” Duggan said in the video.

“So out of respect, I’m not going to do no big ‘hoo’ in here, but when we get outside you better believe there’s some ‘hooing’ … But right now, after eight weeks, here we go, tough guy!”

Duggan also thanked the medical staff, his family, and his fans for holding him down through it all.

“I want to thank my wife and my daughters who stuck with me through all of this, but most of all, I want to thank you folks out there that have been able to share this, and you guys shared your stuff with me.”

As we previously reported, Duggan battled cancer in 2021 and needed multiple procedures, including removing his prostate. He was declared cancer-free in December 2021 before it returned in May.

Hacksaw says he’ll have a checkup in 6 months … and it seems everything is going well!!