For the first time since the pandemic sidelined live music in the U.S. in March, veteran DJ D-Nice finally had the chance to play an in-person live gig. D-Nice, who’s been a mainstay amid safer-at-home regulations with his popular Club Quarantine Instagram Live Sessions, flew out to Hallandale Beach, Florida and played a free set for first responders at the Drive-infieldFest, established after the Preakness InfieldFest in Baltimore, Maryland was canceled. But rather than perform for a sea of fans clamored shoulder to shoulder, he spun a set for a couple hundred cars spread out at the Gulfstream Park race track’s parking lot outside.

D-Nice was one of the first major performers to play in a noticeably growing trend of venues and event producers turning to drive-in concerts with most other means of mass gathering are still off-limits. (The Roots hosted the event’s livestream, which kept a virtual donation jar open.) D-Nice has spent the past two months adapting to unorthodox shows performing for his screen with Club Quarantine. Still he says, adapting to an audience largely sitting in their cars had a bit of a learning curve.

“It was definitely strange to adjust to performing to an audience of vehicles. The way people are moving in their cars, it took me about 15 minutes to adapt to that,” D-Nice says. “The call and response became them honking their horns, and once we all got into it, it started to feel like a party.”

D-Nice isn’t alone. Keith Urban played a small complementary drive-in gig for first responders in Nashville on May 14th as part of the Citi Concert Series, marking concert giant Live Nation’s first go at drive-ins in the U.S. Several other paid drive-in shows are moving forward now as well. The Texas Rangers will host eight concerts from four acts in Dallas outside of their new ballpark in June. At $40 per car or $80 for a VIP parking space toward the front of the stage, the first four shows sold out in minutes, with four added shows selling out in a few hours. The Tupelo Music Hall in Derry, New Hampshire is readying its second drive-in show this coming weekend, and rock band Spafford will play one at a drive-in movie theater in Mesa, Arizona on Sunday. California’s Tailgate Fest, a country festival going on its third year this August with Dierks Bentley as a headliner, had already toyed with the drive-in concept before the pandemic.

Weeks after Live Nation CEO Michael Rapino told investors on a quarterly earnings call that the company would experiment with drive-in shows this summer, Live Nation also sold out its first drive-in show in Denmark on Wednesday with 600 cars in attendance. Assuming all goes according to plan and more shows proceed stateside, Live Nation would put on these concerts in their amphitheaters, the company says, and allow fans to tailgate and give pod-style seating to keep social distancing measures active.

“Our ultimate goal is to connect fans with artists to create those lasting memories, and we have teams around the world exploring unique ways to make that happen,” Tom See, Live Nation’s president of venues, U.S., tells Rolling Stone. “There’s not a one-size-fits-all approach to drive-in concerts, but we’re fortunate to have our venues and logistics in place to ramp these shows up quickly as communities are ready. Artists and fans are having fun with them, and employees and crews are glad to be working some shows, so for us it’s a win all around.”

1/ST LIVE managing partner Jimmy Vargas, the Florida show’s organizer, says his company plans on expanding drive-ins across the country. 1/ST LIVE, whose parent company the Stronach Group has ample real estate space through its horse racing tracks across the country, wants to expand shows to key markets where it has race tracks like San Francisco and Los Angeles when measures are allowed. While the show for first responders with D-Nice was free, Vargas said the company would likely implement some type of ticketing system for future shows.

But Vargas doesn’t foresee allowing more than 300 cars in for a show; otherwise it’d just be listening to a concert on the radio, he says. The quality of the show is better as fans won’t get views obstructed by other cars, but the potential revenue per show is lower. Revenue could come from sponsorships and partnerships with different merchandisers and culinary partners, but it’s still a bigger challenge than monetizing a normal show. “It’s a matter of managing expectations for the artists and for the fans too,” Vargas says. “It ain’t the real thing. But it’s the closest we’re going to get right now.”

It’s an innovative idea that gives a glimmer of fun to an otherwise drab summer season more or less taken away due to the pandemic. And as the latest hope at a chance for live music — and some revenue in a particularly dry period in 2020 — the drive-in trend has grown quickly across the country, and other drive-in show announcements will surely surface in the coming weeks. It’s no cash cow, though, and shouldn’t be expected as such. None of the artists, venue owners or event organizers who spoke with Rolling Stone called the concept anything more than an opportunity to get fans out of the house for a show safely and maybe make a bit of cash too.

“Our goal right now is to provide entertainment. This is one of those situations where 100 pennies makes a dollar. We’re just gathering as many pennies as we can” — Scott Hayward, owner of the Tupelo Music Hall

Scott Hayward, owner of the Tupelo Music Hall, was one of the first to hold a drive-in concert through the pandemic, and after selling out one of the two 75-car capacity shows in the Tupelo parking lot earlier this month, he announced more shows this week, several of which are already nearing capacity.  The music hall is charging $75 per car to attend, and he’s selling food and beverages and hopes to set up a tent for a separate makeshift restaurant at the venue as social distancing continues to ease in New Hampshire. Tupelo will do multiple shows per day and wants to make some livestreaming revenue too. 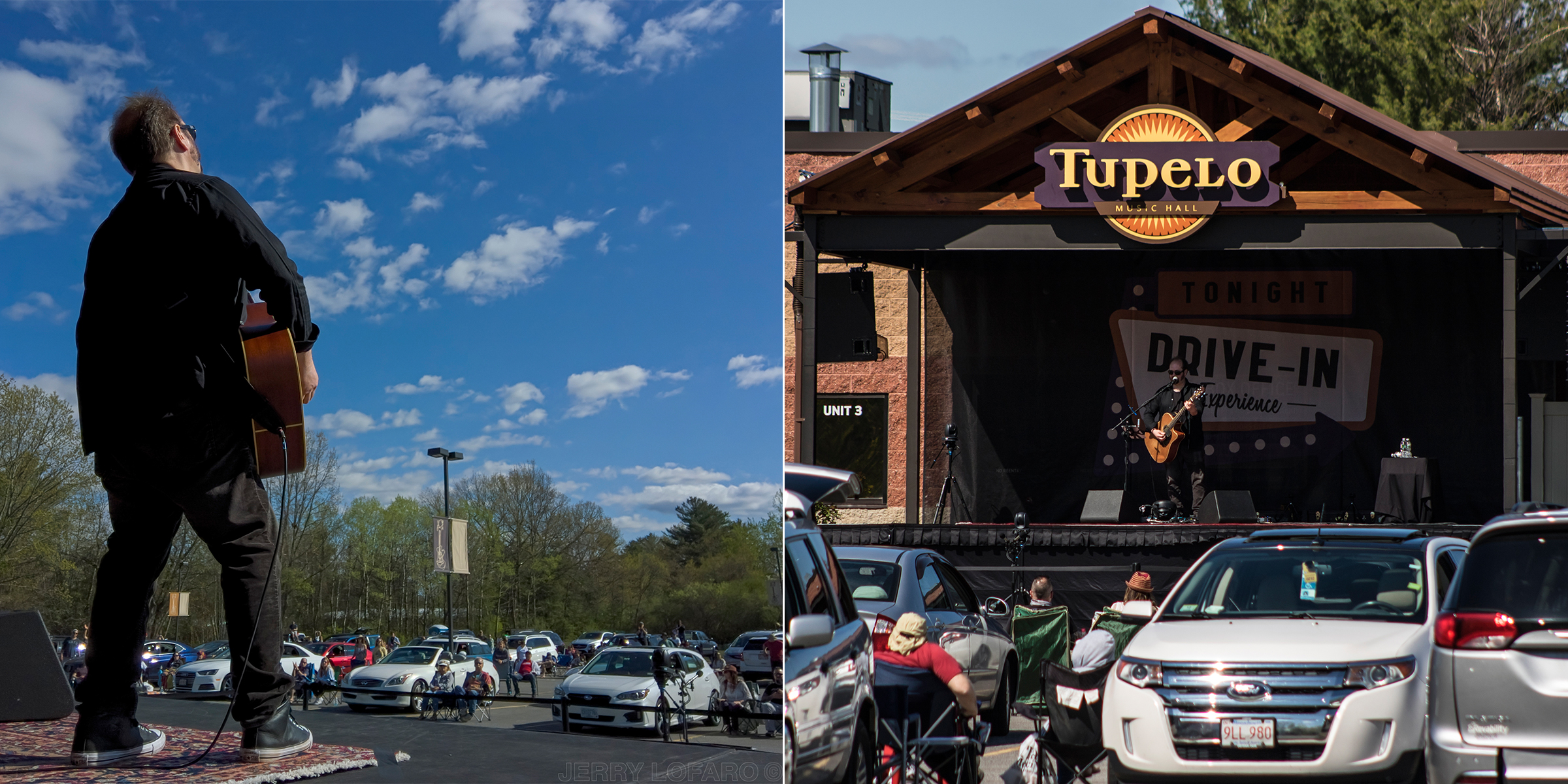 But all these ventures still only add up to a small fraction of what a normal concert brings in. Hayward is preparing for a second outbreak and hopes enough drive-in concerts through the summer can earn enough to pay his staff through the winter if a second wave hits and stricter social distancing measures are reinstated. Still, he says, he’s cognizant of the risks a venue takes putting on a show and wouldn’t organize a traditional concert if New Hampshire allowed them to happen.

“The goal wasn’t to match what we were doing; we’re supposed to be doing $300,000 a month in ticket sales,” Hayward says. “It’s to provide shows to help some artists and play some shows. It’s better than being closed. Our goal right now is to provide entertainment. If we can pay some bills, great. This is one of those situations where 100 pennies makes a dollar. We’re just gathering as many pennies as we can.”

And for the Texas Rangers, where Globe Life Park hosted concerts for the likes of Billy Joel and Paul McCartney last year, $40 tickets for a few hundred cars with no food, beverage and merchandise revenue just can’t compare. “As an industry, these are uncertain times; we’re calling for creative things,” Rangers Executive Vice President for Sports and Entertainment Sean Decker tells Rolling Stone. “These shows are about doing creative things to get folks outside and create and maintain jobs.”

The concert experience could vary from show to show as well. Several venues have staggered cars across their lots both to make distancing easier and to help ensure cars don’t block other attendees’ views of the stage.

Whereas Tupelo and 1/ST started with a PA system alongside a radio transmission to give fans a more authentic experience compared to traditional concerts, the Rangers are going radio-only for now to further encourage fans to stay in their cars. And while The Rangers and 1/ST geofence their radio streams so they can’t be accessed outside of the parking grounds, Tupelo’s shows are more accessible. The tech isn’t always perfect. For 1/ST’s show with D-Nice, attendees further from the stage had more delay on their radio streams from the PA than those who were closer in, Vargas says.

Answers to the live industry’s financial woes or not, drive-ins have given artists and fans some of their first in-person tastes of a live show since March, a welcome addition for artists aching to get back on the road. Kasim Sulton, best known as the bass guitarist of the 1970s band Utopia featuring Todd Rundgren, will take a four-hour drive from New York to Derry, New Hampshire to play Tupelo’s second drive-in gig.

Sulton is playing solo instead of with a band to keep up social distancing, and he isn’t expecting much of a payout — he’d be satisfied to make enough to pay expenses for the trip. But he’s playing live again, and that’s enough for now. “This is my 44th year in the music biz performing live professionally. I’ve been home since the middle of March, not because I want to but because I have to,” Sulton says. “That for me is an anomaly. Being forced to stay home doesn’t feel right. To have the opportunity to perform in front of an audience, it’s a relief for me.”