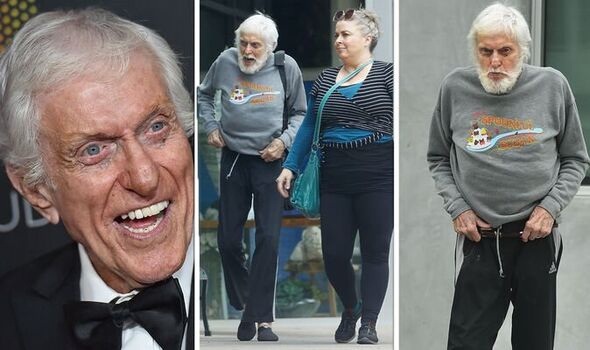 Dick Van Dyke made a rare appearance with his wife Arlene Silver yesterday as they enjoyed lunch following a workout at a gym in Malibu. The Hollywood icon, 96, wore a Mary Poppins-inspired sweatshirt that read “Spoonful of sugar” in a nod to Julie Andrews’ famous song on the 1964 film.

The star looked in good spirits as he and Arlene were deep in conversation as they headed to lunch.

Dick paired the grey sweatshirt with a pair of black trousers and trainers along with his signature white beard.

Meanwhile, Arlene opted for a striped, wrap-around top with a pop of turquoise underneath.

She too donned a pair of black leggings and wore a pair of sunglasses on the top of her head.

Dick previously addressed his marriage to Arlene earlier this year.

He said: “I thought there would be an outcry about a gold digger marrying an old man.

“But no one ever took that attitude,” he told Closer Weekly.

On Valentine’s Day, Arlene shared a clip of herself and Dick performing a dance to Richard Adler and Robert Allen song Everybody Loves a Lover.