A distinctive laugh is part of a successful joker’s comic arsenal. Jimmy Carr sounds like a seal with its flipper stuck in a door. Michael McIntyre giggles like a five-year-old girl.

But for other comedians, hearing one of those unmistakable laughs in the audience must turn the blood cold.

There’s a recording of Frankie Howerd at the Establishment Club in Soho, from a comeback gig in the early 1960s (Frankie spent his career going away and coming back). One nasal bray keeps cutting through the crowd — it’s Kenneth Williams, and he’s sozzled.

Rob Brydon suffered a similar heart-stopper at a gig on the Edinburgh Fringe. The laugh echoing from the back was simple yet instantly recognisable. ‘Hah! Hah! Ha-ah!’ it went. Everyone started turning round to stare. Ronnie Corbett was in the house.

Anyone who watches Would I Lie To You? knows Brydon has a Pavlovian reaction to Ronnie’s name. The first mention of it sends him into a paroxysm of impressions. 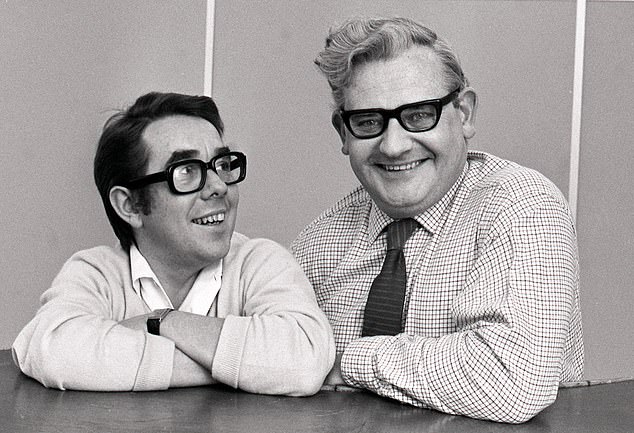 Corbett’s generosity to other comedians was legendary. But his private life as a family man was less known. Pictured: Ronnie Corbett and Ronnie Barker

Rob, speaking on The Two Ronnies: Ronnie Corbett’s Lost Tapes (ITV), remembered the night… and how he started telling one of the star’s own gags — about his grandad who died at the Battle of Little Bighorn.

Far from being aggrieved, Ronnie joined in from the stalls with the punchline: ‘He wasn’t fighting, he was camping in the next field and went over to complain about the noise.’

Corbett’s generosity to other comedians was legendary. But his private life as a family man was less known. This retrospective, coloured with snatches of home movies showing Ronnie playing with his daughters, Emma and Sophie, revealed his charm off-screen.

The fact the pictures were on cine film, filled with flickering colours and sunlight flares, made them seem ‘much more like a memory’, Brydon said perceptively.

Since his death five years ago, his widow Anne hasn’t been able to watch the footage, until now. As her husband danced into the frame, showing off his tan during a holiday to Portugal in 1969, she couldn’t help saying: ‘Hello, darling.’

He was always shy about telling her he loved her. She told him, when he wanted to murmur something sweet, to say: ‘Ambrosia Creamed Rice.’ ‘ACR’ became a code between them.

Nothing we discovered will alter our view of Ronnie very much: what mattered to his family will be sidenotes to his fans — he liked colourful shirts, he could be a stern taskmaster. 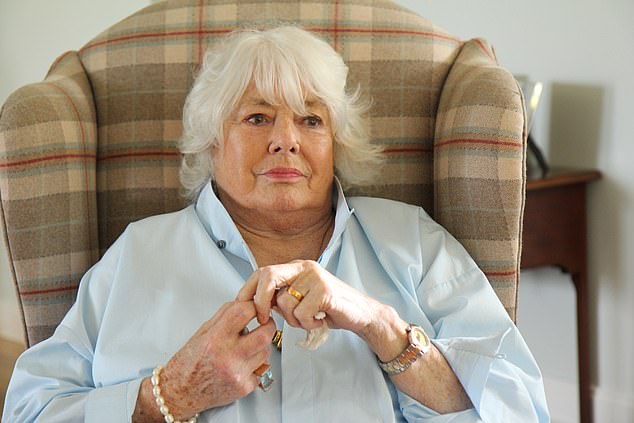 Since his death five years ago, his widow Anne hasn’t been able to watch the footage, until now. As her husband danced into the frame, showing off his tan during a holiday to Portugal in 1969, she couldn’t help saying: ‘Hello, darling’

But these details fill out our understanding of a cherished entertainer. It’s good to know that, much as millions admired him, he was most loved at home.

If Sharon Horgan carries on the way she’s going, she’ll end up a national treasure, too. The star of Catastrophe and co-writer of Motherland plays Shona, the patient, lonely sibling to an overwrought and needy Aisling Bea in This Way Up (C4).

The two women share such an edgy, sisterly friendship that it’s hard to believe they haven’t grown up together in real life. Bea plays Aine, desperate for a love affair with her employer, Richard (Tobias Menzies) — a widower who has to turn his late wife’s photograph face down before he can take her to bed.

What with the kinky exploits on C5’s Lie With Me, this has been quite a week for graphic sex scenes. Aine’s ended with her weeping uncontrollably.

‘That was lovely,’ she sobbed, though her plea that these were ‘happy tears’ rang hollow.

‘Sometimes,’ Shona tells Aine, ‘you talk like you’re the only one who’s ever sad. And it’s annoying.’ This Way Up has jokes, but it’s the pain behind the comedy that lingers.

Drunken sailors of the night: Bruno Tonioli and Craig Revel Horwood joined in with Cornwall’s singing Fisherman’s Friends for a sea shanty on their Great British Road Trips (ITV).

‘Hoo-ray and Upsy-Daisy,’ sang Bruno. ‘Up she rises’, surely?